Ahead of the US-Iran nuclear talks in Vienna, the American envoy said Washington will not “sit idly” if Tehran chooses to stall the talks and advance its atomic program to the point it’s “too close” to a working weapon.

If Iran doesn’t wish to return to the Joint Comprehensive Plan of Action (JCPOA), “if it continues to do what it appears to be doing now, which is to drag its feet at the nuclear diplomatic table and accelerate its pace when it comes to its nuclear program, if that's the path it chooses, we'll have to respond accordingly,” Malley added.

If they start getting too close, too close for comfort, then of course we will not be prepared to sit idly. 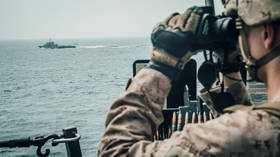 The deal, negotiated by the Obama administration in 2015, envisioned comprehensive outside oversight of Iran’s civilian nuclear program, in exchange for sanctions relief. In addition to the US and Iran, the JCPOA involved China, France, Germany, Russia and the UK. The Trump administration pulled the US out of the deal in May 2018, however, and imposed additional sanctions against Tehran.

A new round of nuclear talks is due to start in Austria on Monday. As the Iranian delegation refuses to meet with Malley directly, the discussions will involve an EU diplomat shuttling between the two. Iran demands a lifting of all sanctions, but the Biden administration said it will only discuss measures imposed by its predecessor, including a ban on other countries buying Iranian oil.

Dozens of passengers who arrived in Holland from South Afric...