The Secretary-General visited the northern town of Llano Grande, in the Department of Antioquia, along with Colombia’s President, Ivan Duque, as well as the former FARC-EP commander, Rodrigo Londoño. The town is one of several areas in the country where the former guerillas are being reincorporated into civilian life.

Colombia has 32 Departments, or ‘States’. With up to 80 per cent of its population affected, Antioquia was one of the areas most impacted by the more than 50-year conflict.

Llano Grande is a town of 150 inhabitants, where former ‘enemies’ now live and work together. With the support of the United Nations and the Government, the small village has become a place where peace reigns, and as inconceivable as it may have seemed five years ago, FARC combatants and locals now consider themselves family.

The UN chief walked through the town and was able to talk with its residents who are benefiting from different reincorporation entrepreneurial projects.

“I am very pleased to be in Llano Grande and I see first-hand the achievements of peace,” Mr. Guterres while visiting the town’s tailoring workshop.

There, he spoke with worker Monica Astrid Oquendo, who recently told UN News that the Peace Agreement had brought with it initiatives that have greatly helped their community.

Mr. Guterres also spoke with other workers about their labour and discussed the importance of women’s leadership in the peace process.

A new brand of coffee

Meanwhile, a group of former combatants took advantage of the UN Chief’s visit to launch Trópicos, a new coffee brand created by a cooperative with 1,200 members.

I'm grateful to have met members of the Llano Grande community in Colombia.

Every day, they renew their commitment to building a country in peace & addressing remaining challenges.

They know that peace doesn't come from one day to the other. It takes effort to build & maintain. pic.twitter.com/zd1DVxQAwh

Mr. Guterres was very interested in the cultivation process of the plant and the different types of coffee that are produced in Colombia.

“Trópicos [Spanish for ‘tropics regions’] is a brand whose geography offers special characteristics. The ‘rebellion’ of the tropics makes this coffee special because it comes from the community, and from people in the process of reincorporation. It not only has a social background but also quality standards. We have carefully selected each grain to be able to achieve high quality and to offer ‘Trópicos’ to the world,” explained Frey Gustavo de Maté, one of its creators.

The Secretary-General also learned of other projects such as a town school, an arepas (Colombian cornmeal cakes) factory, and a soap factory.

Later, in a brief address to the community on the town's soccer field, Mr. Guterres congratulated everyone for “their enthusiasm and dedication” to these projects, which, he added, have the support of the Government and the international community.

He also acknowledged that the projects have been hampered by financial difficulties and stressed that as such, it will be necessary to redouble efforts to guarantee their sustainability, as well as to involve the private sector to help find solutions.

The UN chief recognized the work of the community in the entire municipality of Dabeiba, of which Llano Grande is part, and in other nearby municipalities, which he praised “as an example of integration and reconciliation for receiving ex-combatants with open arms and normalizing democratic life”.

“This shows true human qualities of teamwork, generosity, hope and courage to build a better future,” he added.

Peace does not come overnight

After hearing from many more members of the community, Mr. Guterres said they know better than anyone that peace does not come overnight.

“It costs work to build it, take care of it, sustain it…There is a paradox: the objective of peace is a society with no enemies, but unfortunately there are enemies of peace,” he said expressing his solidarity with the victims and their families.

Since 2017, there have been 30 homicides and four disappearances, mostly men, only in the Department of Antioquia, according to UN reports.

Moreover, throughout the country, more than 300 former combatants have been murdered, with some 25 disappearances. Almost 500 human rights defenders and civic leaders have also lost their lives in violent attacks.

Mr. Guterres said he admired “the tenacity and commitment” of the people who “continue to bet on building peace in Colombia on a day-to-day basis”. He also warned that “ensuring their security is vital to consolidating peace”.

The reintegration of former FARC combatants into civil society is being facilitated at a site in the small town of Llano Grande in Dabeiba, Colombia.

The Secretary-General reaffirmed the commitment of the United Nations to support the peace process and assured that he will discuss with the Government both the issue of security and housing. “We are all going to take advantage of this meeting to enhance our work,” he said.

However, he said that he recognized “with humility” that the Organization’s work is secondary and that the essential work in the construction of lasting peace belongs to Colombians.

“If this were a film, we would not be candidates for the Oscar for Best Actor, but for the best Supporting Actor,” he concluded

Joining Mr. Guterres in Llano Grande was the ex-commander of the FARC-EP, Rodrigo Londoño, who stressed that even though some 300 signatories to the peace deal had been killed, “we remain committed”.

The visit of the Secretary General, he said, “shows that we have made progress and that this is not a failed process.” It also “refutes the assertions of those who do not believe in this process.”

Mr. Londoño also expressed gratitude to Colombian President, Iván Duque, saying that the leader’s presence in Llano Grande “is encouraging” and a hopeful sign that the Colombian people must continue travelling the path of peace.

In his remarks, President Duque stated that the progress underway in Llano Grande showed the will of his Government to support efforts to build lasting peace.

“I think the most important thing that we see today is the rejection of violence … We value those who have made the decision to categorically reject the violence that was once justified,” the President said, and added: “This implies that there is no cause or ideology …that justifies murder, kidnapping or any other form of violence that threatens our freedom.”

UN Secretary-General António Guterres, left, along with the Colombian President Iván Duque, during a ceremony in the town of Apartadó to mark the fifth anniversary of the Colombia peace agreement.

From Llano Grande, Mr. Guterres and President Duque flew by helicopter to Apartadó, in the Urabá region, a province dedicated to the cultivation of bananas and where the Government chose to hold a regional commemorative event to mark the fifth anniversary of the peace accord.

Ahead of that event, they visited the region’s Territorial Development Programme, which seeks to improve the collaboration of different territorial agencies to achieve more effective sustainable development. With the Government’s backing these programmes are supporting a range of reconciliation projects, including the building of a school that will be inaugurated soon.

The celebration event was held in a park and was attended by a large audience comprised of members of the municipality and the national government.

For his part, the Secretary-General highlighted the role of women in the peace process and stressed that their participation “can help generate more inclusion.”

He went on to express concern about the fact that several regions continue to face increasing insecurity.

“The actions of the illegal armed actors diminish the hopes of local communities, as well as jeopardize the prospects for sustainable development,” said the Secretary-General.

He concluded that “peace requires facing the suffering of the past” and “reconciliation is the only way to a stable and lasting peace.”

Tomorrow on his last day in Colombia, Mr. Guterres will participate in the commemoration of the fifth anniversary of the signing of the Final Peace Agreement in the capital, Bogotá. He will also attend the ‘La Paz es Productiva’ fair. 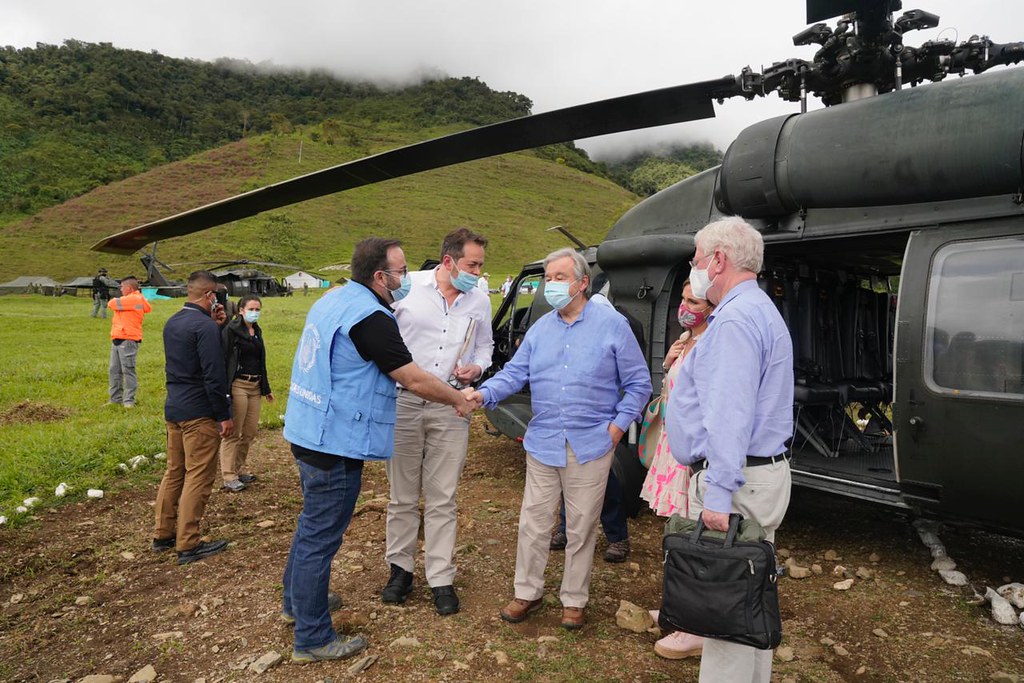 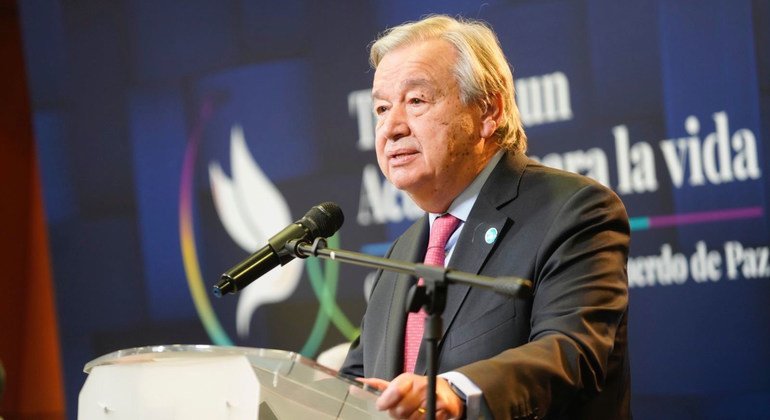 Colombia’s peace process is taking ‘deep roots’, but all sid... 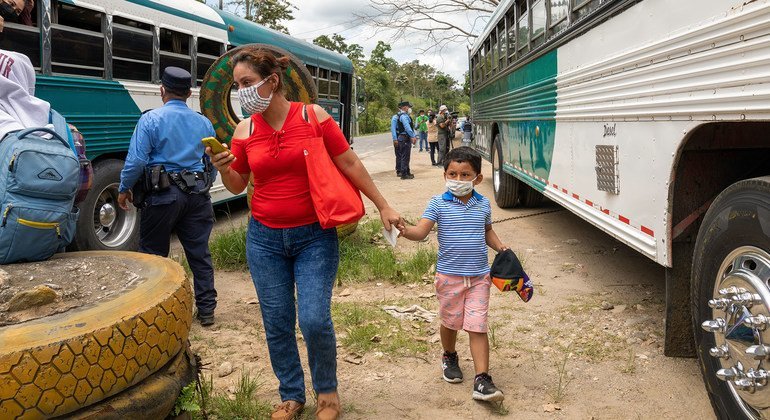