New cases of the West Nile virus, spread through bites from infected mosquitos, were recorded in Massachusetts and Arizona. Officials urged people to take precautions and raised the risk level for the potentially fatal infection.

At least three cases of the West Nile virus (WNV) have been officially confirmed in Massachusetts, with the state Department of Public Health (DPH) having raised the WNV risk level from ‘low’ to ‘moderate’ in dozens of areas, including the Greater Boston area.

“We are seeing significant expansion of virus activity in mosquitoes,” health officials warned on Thursday, adding that the risk won’t lessen until the weather changes. “Risk from West Nile virus will continue until the first hard frost,” the DPH statement said, urging people “to remember to continue to take steps to avoid mosquito bites.” 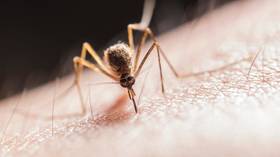 Massachusetts health officials said that the two new infections recorded were both in male patients over 50 years of age.

Insects carrying the virus have also been found in Steuben County in New York State. While there have been no reports of human cases in the area so far, residents have been asked to protect themselves from mosquitos, with officials warning of possible serious health conditions from their bites.

“Some individuals will develop a more severe form of the disease with encephalitis or meningitis and other severe syndromes, including flaccid muscle paralysis,” the county health department said on Thursday.

In Arizona, a man was recently paralyzed after contracting the virus. “He’s such a big strong guy and he just can’t move…he can’t talk, he can’t swallow on his own, so he’s got a feeding tube,” the patient’s wife told local news ABC15, pleading for help.

At least one WNV-related death and over 30 human cases have been recently registered in Maricopa County in the southwestern state, its DPH officials announced this week. Environmental services currently conducting testing on mosquitos said they’ve detected 377 positive cases in the insects and it is “a lot” compared to the ten found last year. They warned more people are likely to contract the infection.

If bitten by an infected mosquito, a person of any age can get the virus, with older people of 50+ being at higher risk for severe illness. While some may have no symptoms, others may suffer flu-like conditions, including fever and head and body aches.

Sticky Inflation and Job Market Tightening Will Push Fed to ...